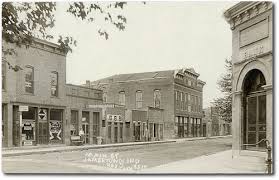 Jamestown, Indiana in Boone and Hendricks County was established in 1830, platted in 1832 and given its name as an honor to its founder James Mattock.  The town held the designation as Boone County, Indiana’s first county seat for 1 year until legislative action forced county leaders to move the county seat to nearby Lebanon, Indiana.  The primary economic driver for Jamestown from the 1860s  to the late 1950s  was the railroad.  In 1869, the Indianapolis, Bloomington and Western Railway (Later the Peoria and Eastern) came through the center of town and stopped often with people, dry goods and agricultural deliveries.  This railroad driven commerce spurred private investment in housing and commercial structures and the town saw substantial growth until the great depression of the 1930s.  After World War II the town experienced substantial growth once again and the population increased from 550 in 1930 to 940 in 1970. The population has remained steady since the 1970 census and is estimated at 950 today.